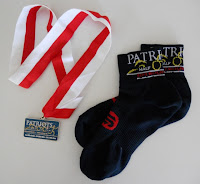 After two seasons of racing, it seemed like a good idea to try a half iron-distance race this year. I put the Patriots Half in Williamsburg, Virginia on my B-race list. It had some extra significance, being in historic Jamestown, with the swim in the James, the day before the 10th anniversary of 9/11.

Because my training was geared to my A-races at sprint and Olympic distances, and because my running legs have not been 100%, I wouldn’t be fully trained up for this distance but I wanted to have a go at it anyway. My goal was to complete the distance and enjoy it.

Up until race morning it was uncertain if the swim would happen due to anticipated flood waters coming into the James River. The swim at the Nation’s Tri, being held up the coast on the same day, had been cancelled. Fortunately, the swim was a-go and the water was even warm enough to be non wetsuit-legal.

The swim is right across from the Jamestown Settlement and the scene is just gorgeous. I chatted with the VT Hokie Triathletes and met up with some other One-on-One athletes in the staging area. This leg begins just off the beach in some pretty shallow water. Right before the start the group of swimmers around me agreed it would be faster to swim rather than wade in thigh-deep water and at the sound of the horn we dove and swam. It turned out to be the better decision. At the pre-race meeting a big deal was made of the tide/current coming up the James and how we should direct our swim path to let the current pull us toward the buoy. The current turned out to be less than what was described and we all swam too wide to the first turn.  The swim didn’t seem much longer than the 1500 Oly swim and I was kind of sorry to see it end. I thought it felt stronger/faster than usual but the time doesn’t really back that up. Maybe swimming straight is my issue. At any rate, I continue to gain confidence and comfort in the water.

It was a quarter mile run to T1 with sand, grass, bogs, rocks, and carpet along the way. 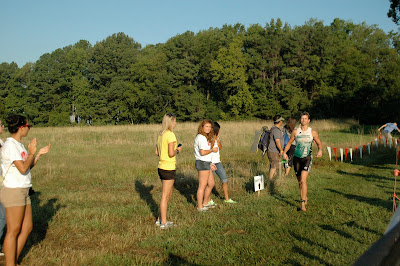 The half iron bike is usually 56 miles, but because of some sort of political/permitting issue, our route was an additional two miles. I had NO idea how to pace this. I decided early on that keeping my heart rate in the mid 150’s would be about right. That is about upper aerobic/lower tempo.

I thought it would be clever to cut up a PowerBar into bite-sized pieces and put them between waxed paper in the bento box to make it easier to eat them on my every-20-minutes fueling plan. That would have worked had it not been hot and humid which left the pieces melted back into solid bar form and now laminated by waxed paper. I made it work. I didn’t take in as many calories as I thought I would – 2/3 of a Powerbar, one Accel 2nd Surge Caffeinated gel, and 200 calories of Perpetuem with Xtend BCAAs in my aerobottle. A cage-mounted bottle had water with Xtend.

I started off pretty strong (don’t we all?). Then I hit mile 10 and realized I had run out of things to think about. How was I going to entertain myself for the remaining 48 miles?!  When had I become so boring to myself?  I did offer thanks for cycling in comfort (thanks to the no-seat adventure of IronHolgs!), thought of some blog posts (all since forgotten), and read any and all signs I could find. I hit a nasty pothole at mile 21 and then wondered just how much abuse a wheel can take. At mile 45 I thought about how I wished I’d used chamois butter…youch.

I saw my friend Tanya a few times on the course. She was looking strong and confident. Not like the poor guy I saw whose loosely hanging seat-mounted bike bag bounced back and forth from one hamstring to the other like some sadistic racquet sport. I inquired and he confirmed that, indeed, it was highly annoying.

With two miles to go, I pedaled atop my shoes and stretched out the piggies to let them know it would soon be time to run. I had averaged 20.7 MPH and had kept a pretty steady heart rate, pace, and cadence throughout the fairly flat course. 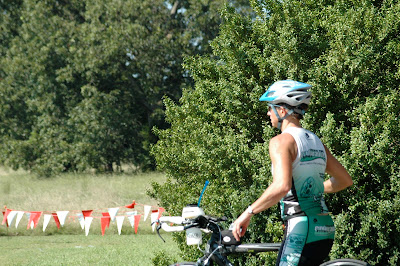 In T2 I made the split-second decision to take my small white bar mop towel with me. GOOD decision. I soaked it with ice water at the first aid station and draped it around my neck. I later used it to wipe my face and hands, and to wave it as an SOS flag (OK, not really). The first mile I had to consciously work to slow-slow-slow myself down looking for a pace in the low 8’s.  That was my best mile. Things quickly unraveled.

I sensed my inner quads getting tighter and tighter. I had a sinking feeling it could become a problem. I did some butt kicks thinking that would stretch them out. Big mistake. At mile 2-1/2 I was stopped in my tracks by impressive knots and visible spasms. I fell into a crouch on a small footbridge over standing water and watched helplessly as the mosquitoes moved in on me. It was like an out-of-body experience and I wasn’t sure how or if I would ever stand again. Person after person passed me, each asking if I was OK and some offering to call for a medic. I must have looked worse than I thought.

Somehow I stayed calm and clear-headed. The idea of not finishing had never entered my mind, but suddenly I saw a DNF as a real and frightening proposition. I just needed time and eventually I was able to stand. Then I walked. Then shuffled. I made it my goal to get to the next aid station where they had electrolyte tablets. I remembered my friend Ryan Day suffering the same fate and somehow getting through it. I was OK, sort of, until I tried the butt-kick thing again and there I was again, crouching, immobile. Finally I figured out NOT to do that. Needless to say it was a long and painful run/walk to the finish. I kept my cool and just did what I could. (Ben, I’ll be asking you and your experts about this!!) 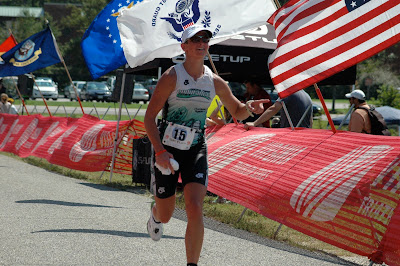 The good news is my tendonitis was not much of an issue. Then again, if an elephant is standing on you, chances are you won’t notice a fly.

Side note: lately at every race I see one girl (maybe the same one?) who wears her race belt up under her arms, around her chest, instead of around her waist or hips.  How can that possibly be comfortable and does she not know she has another more typical option?

I crossed the finish line. I had fought back and finished my rookie half. The first person I saw was my friend John. I grabbed onto him and broke down into sobs. Poor John, stuck with this emotional sweaty mess. He directed me over to some shade and friends Tanya and Edie joined us. Then the real fun began as the cramps moved in with a vengeance. I described it as “childbirth of the legs”. It was extremely painful from quads to feet. I’m sure I wasn’t the best company there in the fetal position with my face contorted. Medical attention was suggested, summoned, and very quickly arrived. I was lifted up and taken to the med tent and plugged into an IV. Within half an hour the cramps were gone. Now I just feel like I had the equivalent of a 5+ hour leg workout with Kurt. 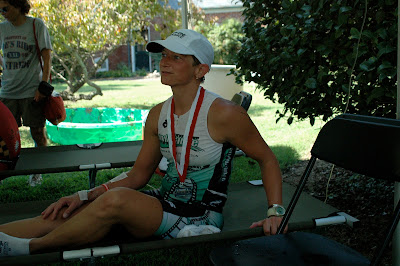 I’ve gotten pretty comfy at the sprint and Olympic distances so I am glad I pushed beyond that and did something that tested me in new ways. I am proud of myself for staying calm and doing the best I could with the unexpected challenges I faced. Never give up!! Even with a horrible run, I still came out 4/36 in my age group and 22/175 of all the women.  There is just no telling in a race, and you can’t stop trying, you can’t give up.

My goal was to “experience this distance and enjoy it so I would want to do it again.” Oddly enough, just hours after finishing, I could say that I enjoyed it. It was difficult, frustrating, and painful. But I enjoyed facing the unknown, confronting a challenge, and being among the community of triathletes.
It’s pretty cool to think we all manually moved ourselves 72.3 miles! I hate to drive that far!!